This little girl was born with Pierre Robin syndrome, which is characterized by a very small lower jaw (mandible), and a tongue that falls back causing sleep apnea so severe, that it could cause cerebral impairment when not addressed right after birth. But this patient had not suffered from any cerebral or mental development, on the contrary, she came forward as a very intelligent, sweet, resilient and cooperative personality. She also had a cleft palate which had been repaired by soft tissue closure. She was brought to our office around age 7, in the early transitional phase, as her front permanent incisors and her 6-year molar were erupting. She had severe jaw constrictions (very small dental arches), a retruded lower jaw, and a deep bite, all conditions known to constrict the airways. 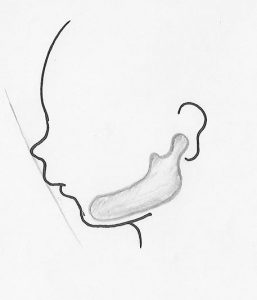 In this illustration, the infant’s jaw, which is already naturally underdeveloped to begin with, is even further back and smaller than the norm, thus constricting the airway in the pharynx. The outward appearance of these children is also typical, as they have a very small and backward positioned chin. Sometimes it seems they do not have a chin at all.

The constriction of the airway is due to the fact that in general anatomical terms, since the tongue is always attached to the base of the lower jaw, if the latter is lagging behind, therefore the tongue will also be positioned backwards, at the expense of the airway space. 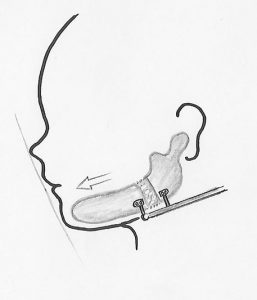 As an infant she had gone through mandibular distraction osteogenesis, which essentially means that surgeons cut her lower jaw around the angles, and added an external screw device which was activated to slowly separate the jaw fragments, and allowed new bone to form in the ever increasing gap. 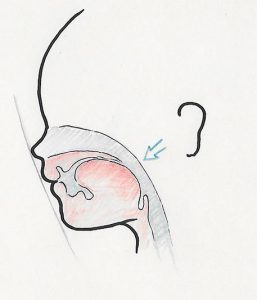 The tongue position after the surgery is somewhat better in this illustration, however this is an exaggerated illustration only. This surgery is just a necessary intervention after birth to avoid life-threatening sleep apnea. In reality, as the child grows, the jaws are still much smaller and backward, and the airway is still constricted, compared to the accepted norms. This is apparent in the situation she presents at age 6.

One major sign of arch constriction, apart from the obvious small arch sizes, is, to the trained eye, the lack of space for lateral incisors, pronouncedly manifested here.

We embarked on a long journey of craniofacial orthopedics, which would involve multiple series of appliances to address all three aspects of growth:
1: LATERAL: expand the jaw size
2: SAGITTAL: bring the lower jaw forward
3: VERTICAL: open up her bite
The appliance Dr. Sarkissian likes using to achieve growth in all three dimensions is the TWIN BLOK, a two-arch appliance which has a midline expansion screw incorporated and repositions and holds the jaw in an open and forward position. This stretched position causes a reactive growth of the growth centers of the jawbone to permanently conform to the position dictated by the appliances.

After several months we have confirmation of growth as the patient removes the appliances and closes, revealing space between the baby molars and a more forward position of the lower jaw.

Dr. Sarkissian decided to go through one more round of TWIN BLOKS because of the long journey ahead of us. 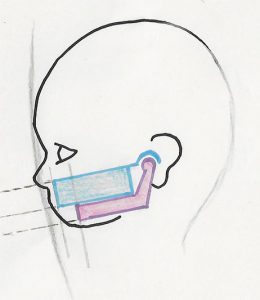 At this point, some sketches are helpful to illustrate the principles of Dr. Sarkissian’s approach: This is a simplified sketch of a retruded mandible (lower jaw). 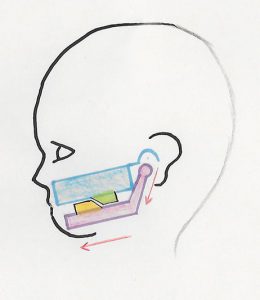 Here we use the removable twin bloks to advance the mandible. 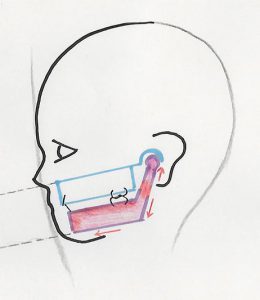 Here we see how the bone reacts and growth centres are activated to conform to the new position. 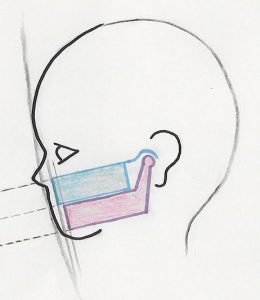 Here is the desired outcome.

A few months later we performed a tongue tie revision with the laser, allowing more freedom of movement of the tongue, necessary for proper function.

After discontinuing the twin blok, the lower primary molars were built up to provide chewing support but also to maintain the forward position of the jaw. Bands were fitted to the lower molars and an Arnold expander was installed. This enables us to anchor the molar region for the upcoming manipulations and elastics to open up the missing anterior spaces, but also continues the slow expansion of the mandible. To read more on vertical bite buildup principles, read Orthopedic Bite Build-Up in Children…

Braces were placed on the lower incisors, and the right canine, which is bulging in front of an incisor, is exposed using the waterlase. The adjacent baby molar is extracted to make room for the canine, which will be tilted backwards into place using a rubber “powerchain”.

Braces on the upper incisors are placed, and utility wires are used for both upper and lower arches. These wires are eventually activated sagittaly (forward in relation to the face) to move all incisors forward and to open up the spaces between the molars and incisors.

The upper arch has received a Wilson expander which will serve as both an anchor for the molars, as well as a slow expansion device. 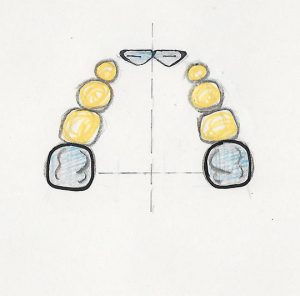 Again, sketches illustrate this phase of therapy. Here we have a maxilla (upper arch) with permanent teeth in blue, and baby teeth in yellow. Usually it is easy to predict crowding when there is no room for the lateral incisors. 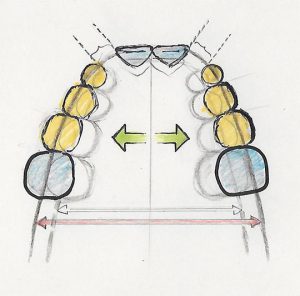 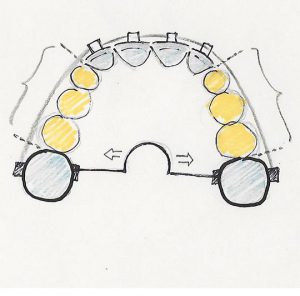 During the late transitional period, when the baby molars are being replaced, a Wilson expander is placed to anchor those molars in place, and to continue slow expansion. Utility wires are then used to align the four incisors, to shift their midlines, and to protrude forward, always striving to keep the space ideal for the incoming canines and premolars.

The lower wire is changed to a straight wire with springs to advance the incisors, as well as shift and correct the midline. The left lower canine has received a button to pull into place.

As more teeth come in, they are incorporated into the braces.

The arches are taking shape. The Wilson expander has been removed, to allow the molars to settle in.

Incisal ramps are built to open the vertical. For better balancing, also called “tripoding”, buildups are placed on the lower molars.

A rotated premolar makes us deliberate by having to use rotation elastics, before being incorporated into the final wires.

The teeth and the vertical dimension are progressing well. The buildups on the lower molars have been removed to allow for their eruption.

The case is finished. This young girl has gone through years of therapy and is happy to take everything off and wear her retainers. 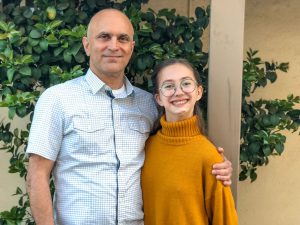 She is happy to be done, with instructions to keep smiling throughout life.

Please read more about the Principles of Jaw Orthopedics…