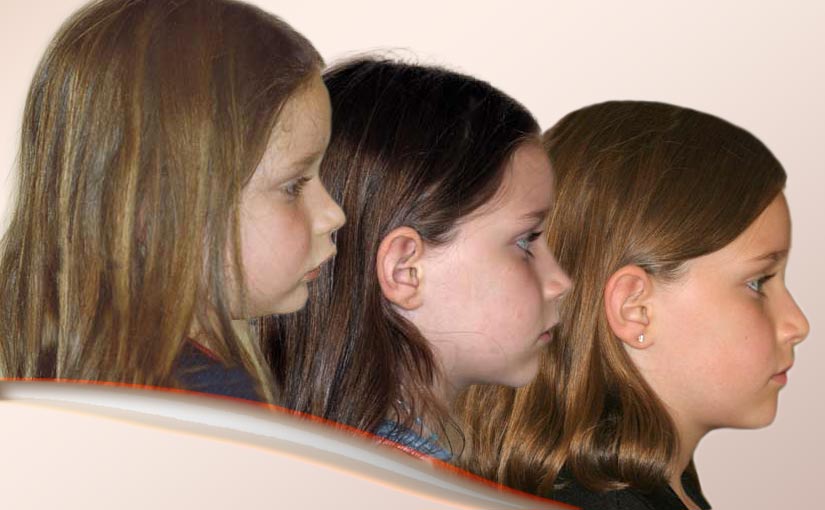 (From Wikipedia: The premolar teeth, or bicuspids, are transitional teeth located between the canine and molar teeth. In humans, there are two premolars per quadrant in the permanent set of teeth, making eight premolars total in the mouth. They have at least two cusps.)

This can be easily accomplished by early intervention therapy and jaw orthopedics. Special consideration is given to achieve and promote an enlarged airway, a healthy jaw joint, a fully developed, wide smile, and a pleasing facial profile with proper lip support.

The guiding principle “First do no harm!” implies that extracting perfectly healthy teeth in order to ‘create space’ in a jaw that is not big enough to accommodate all teeth, is a biological mistake. If jaw orthopedics is initiated precisely when the jaws are still developing (ages 5-11), this notion becomes obsolete. The trick is to MAKE space early, not to amputate later.

Take, as an example, the series of images: This little girl started out with a lower jaw that was too small. This might have been considered cute at this age, but as a young adult, that smaller jaw would have taken away from a pleasing profile. The latest development (bottom image) shows her after a very successful early intervention jaw orthopedics appliance therapy – this is a girl who will – growing up – exhibit facial harmony, a beautiful profile, self-esteem, and determination, that would never be possible with an underdeveloped chin.

There are growth centers in the jawbones which direct jaw growth in three fundamental dimensions: a slightly downward direction, responsible for vertical development of the jaws; a forward direction to help develop a pleasing profile; and a horizontal direction which aids lateral development.

The first sign that the jaw development of a child is not progressing optimally, are crowded teeth, a cross bite or similar manifestations. Traditionally braces were used, possibly after extracting perfectly good teeth to create space, to handle the situation.

Now we understand that these signs are just symptoms and that we have to handle the underlying dysfunction first. This is done with early intervention during the maximum growth phase of a child during the ages of 5 (6) to 10 (latest 11).

At age 10 we might have missed the early jaw orthopedics phase, as eighty percent of jaw growth has already occurred. During this time most of the primary teeth are either loose or already lost, which makes the application of removable appliances very difficult. If this early phase is missed, braces will probably take longer.

To gain a deeper understanding of the strategies employed in early intervention and to understand the positive health effects on opening the airways, lip closure training and nose breathing, read the pages on Strategies of Functional Jaw Orthopedics…